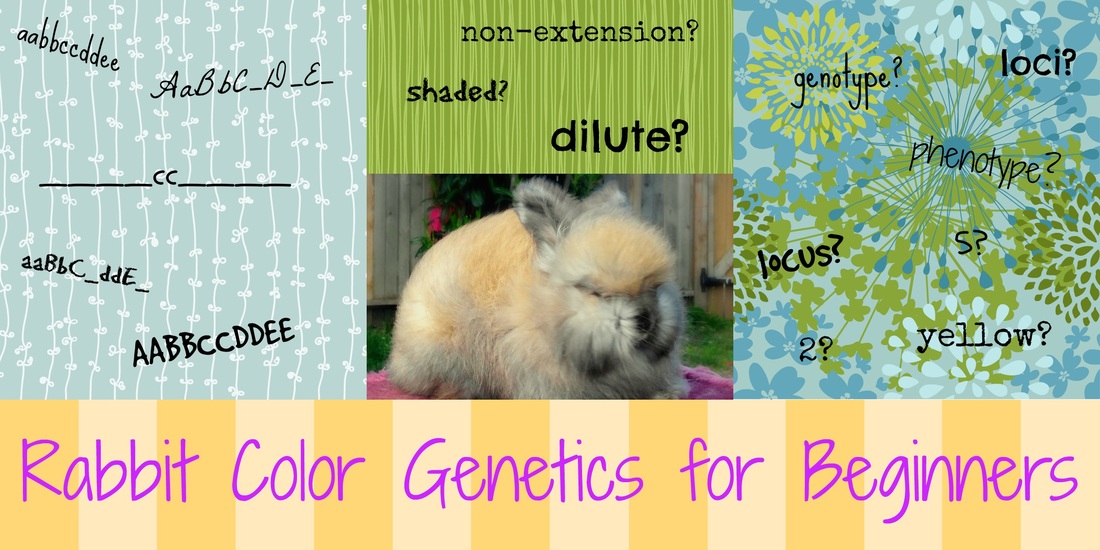 I've received lots of questions regarding color genetics lately. There are lots of websites, articles and books out there that address this topic. What most people seem to struggle with though, is grasping the basic concepts. That is what this page is intended for - to help build the foundation so that you may dig deeper and learn more.

I'm going to set the proper terminology aside, and try and share these concepts in a way that you can truly understand and speak. All genes and colors will be discussed as they relate to English Angoras (EAs) only. Colors and genes not currently recognized in EAs will not be discussed at this time.

Recessive or Dominant?
There are 5 BASIC loci. Each locus is made up of 2 genes, one from each parent. So if Fluffy and Puffy are bred together, and produce Fluffypuff, Fluffypuff will have inherited a gene from Fluffy AND a gene from Puffy on each locus. The result will not be like mixing black and white paints together and getting grey. Instead, one will dominate the other and will result in the color you see on Fluffypuff. Dominant genes are represented by capitol letters. These genes are displayed on the animal that possess them whether they have one copy of that gene or 2. Recessive genes are often hidden and are represented by lowercase letters. They must have 2 copies of that gene to display it. That means that each parent has to carry it and give it to Fluffypuff for you to see it.


*Disclaimer, the c and e loci may show some exceptions to this case, because multiple varieties of recessives exist there. We will not be discussing the way multiple recessives on the same locus react here. This is article is for beginners, so you still have the basic concepts to learn first.*

Down to the Good Stuff
Now that we've got that out of the way, let's get down to the fun stuff. We will discuss the A, B, C, D, and E loci today.

To have an Agouti rabbit, they only need 1 copy of the gene, but, one parent must be agouti itself. It is dominant and therefore cannot be hidden like recessive genes can be.

There are more genes on the locus that are not accepted Angora colors, and therefore, will not be discussed at this time.

To have a black rabbit, you only need one copy of the gene. A chocolate rabbit, however, must receive a chocolate gene from each parent in order to display it.
B = black
b = chocolate

The C Locus
And now for the locus that will flip you upside down on your head. The C locus. Lets start with the easy one: Normal color. Full color. It keeps your blacks black and your chestnuts chestnut. It keeps everything we've discussed so far looking normal. Most rabbits are this normal color, which is represented by a capital 'C.' Agouti with the capital 'C' are chestnut, chocolate agouti, opal, lynx, fawn and cream. Black, chocolate, blue, lilac and tort also have the capital 'C.' I call these "normal colors " or "common colors." This is dominant, so you only need one! You know the drill by now, right? Then you have your lowercase 'c.' When you get to 2 of this little gem, you get a Ruby Eyed White (REW.) That's right, 2 lowercase c's result in an albino rabbit, removing all pigment from the hair, skin, and eyes, leaving you with a white rabbit with red eyes. All other genes are hidden behind this recessive combination. REWs are the ONLY variety that can actually hide dominant genes. That is why I call the C locus "The Great Game Changer." Other recessive genes include: Pointed White, Sable and Chinchilla.

Pointed White is closely related to REW, in that you have a mostly white rabbit with red eyes. It differs, however, because it gives you a colored nose, tail, ears and feet as well as colored toenails. This is a heat sensitive color. The points will darken in cool temperatures and lighten in warm temperatures. Pretty cool, right? Pointed White is recessive and is represented by lowercase letters 'ch.'

Then we have Sable. Sable can make for some pretty neat colors. Sable, smoke pearl and seal all come from the sable gene (though sometimes pearls can come from the chinchilla gene, but often have the wrong color eyes.) The sable gene is recessive as well, and is represented by three lowercase letters 'chl.' It can cause a ruby cast in the eyes of it's carriers.

The chinchilla gene is a nifty little guy. It removes the yellow from agouti patterns and leaves white in it's place. It must be paired with agouti to present itself correctly, but can cause eye color variations in non agouti rabbits. It is yet another recessive gene, represented by the lowercase letters "chd."

The D Locus
The D locus is a pretty simple one. This locus has the power to dilute your colors down to creamy pastels. It turns black blue, chocolate lilac, chestnut opal, chocolate agouti lynx, fawn cream, and so on and so on. D is not-dilute and is dominant. Little d is dilute and is recessive.
D = Not-dilute
d = dilute

The E Locus: To Tort, or not to Tort?
That is the question. We've finally made it to the E locus. This is where your tort genes are located. There are others here, but since tort is so common in EAs, my brain always wants to dub it the "tort locus." But it's really much more than that. Lets start with the easy ones. First, we have E. A very common gene. It means nothing has changed. Agouti is still agouti, black is still black, etc. It's a dominant gene, represented by a capital E. Pretty simple. Equally as common is lower case e, the tort gene. It turns black, blue, chocolate and lilac until their respected tort colors, tort, blue tort, chocolate tort and lilac tort. It turns chestnut and chocolate agouti fawn, and opal and lynx cream (the difference between fawn and cream is the dilute gene. Creams have 2 copies of d, fawns have at least 1 D.) Then we have Steel. Entire books can be written on the steel gene. It is the single most complicated gene to understand. You're not ready for it. The basics? Steel is dominant over E, and is represented by Es. It causes your rabbit's coat to appear to have tan or silver tips. That's all you need to know about the steel gene today!
So a break down of the E locus..
E = Regular, not-tort
e = tort
Es = Steel

Now let's put them together to determine the genotype of a few rabbits.

Now it's your turn. What is the genotype of your favorite rabbit? You can answer this question on our Facebook Page.